I thought it would be fun to take an older image, reprocess it, and crop into smaller sections that would put a new spin on a very commonly imaged object. Hope you like them.  I won’t reveal what the object is until later. 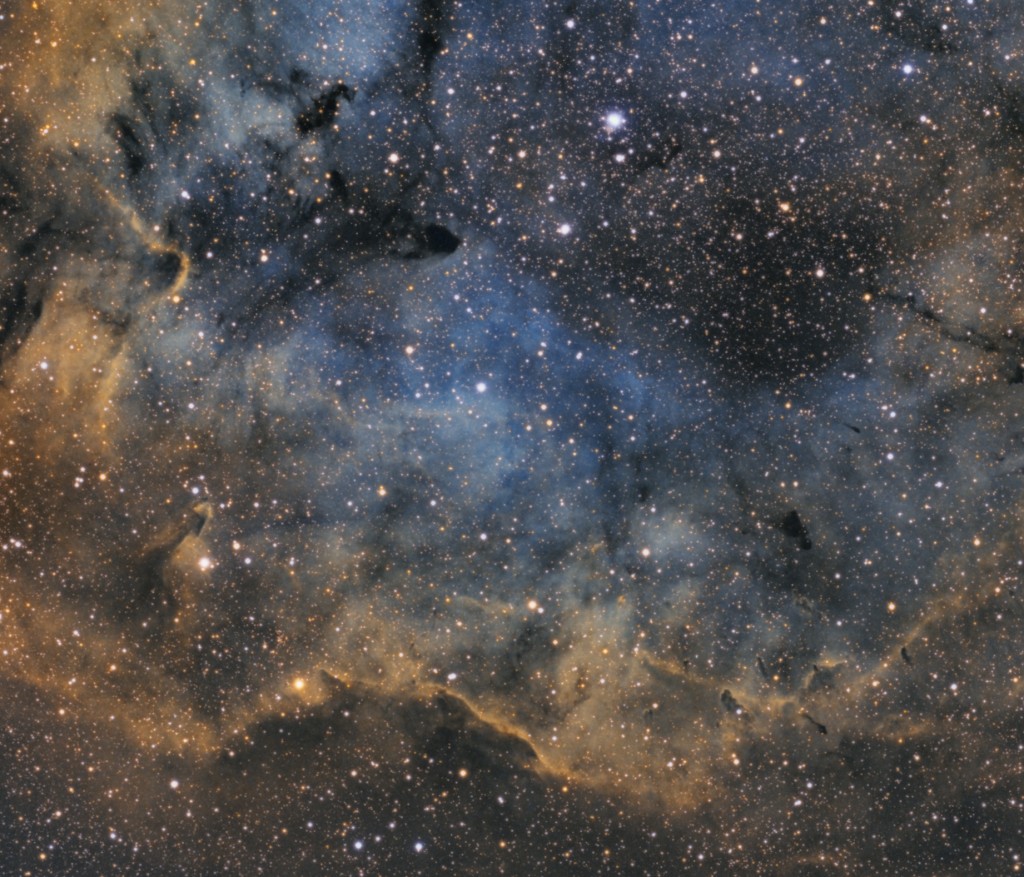 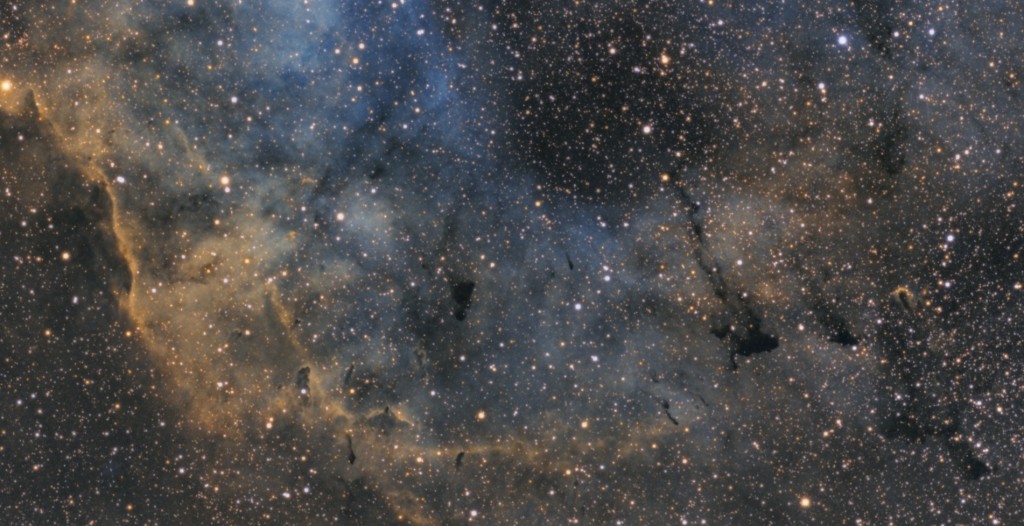 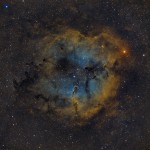 The Elephant’s Trunk nebula is a concentration of interstellar gas and dust within the much larger ionized gas region IC 1396 located in the constellation Cepheus about 2,400 light years away from Earth.[1] The piece of the nebula shown here is the dark, dense globule IC 1396A; it is commonly called the Elephant’s Trunk nebula because of its appearance at visible light wavelengths, where there is a dark patch with a bright, sinuous rim. The bright rim is the surface of the dense cloud that is being illuminated and ionized by a very bright, massive star that is just to the west of IC 1396A. (In the Figure above, the massive star is just to the left of the edge of the image.) The entire IC 1396 region is ionized by the massive star, except for dense globules that can protect themselves from the star’s harsh ultraviolet rays.

The Elephant’s Trunk nebula is now thought to be a site of star formation, containing several very young (less than 100,000 yr) stars that were discovered in infrared images in 2003. Two older (but still young, a couple of million years, by the standards of stars, which live for billions of years) stars are present in a small, circular cavity in the head of the globule. Winds from these young stars may have emptied the cavity.

The combined action of the light from the massive star ionizing and compressing the rim of the cloud, and the wind from the young stars shifting gas from the center outward lead to very high compression in the Elephant’s Trunk nebula. This pressure has triggered the current generation of protostars.[2] 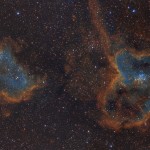 The Heart Nebula, IC 1805, Sh2-190, lies some 7500 light years away from Earth and is located in the Perseus Arm of the Galaxy in the constellation Cassiopeia. This is an emission nebula showing glowing gas and darker dust lanes. The nebula is formed by plasma of ionized hydrogen and free electrons.

The nebula’s intense red output and its configuration are driven by the radiation emanating from a small group of stars near the nebula’s center. This open cluster of stars known as Melotte 15 contains a few bright stars nearly 50 times the mass of our Sun, and many more dim stars that are only a fraction of our Sun’s mass. The cluster used to contain a microquasar that was expelled millions of years ago.

This complex is the eastern neighbor of IC1805 (Heart Nebula) and the two are often mentioned together as the “Heart and Soul”. 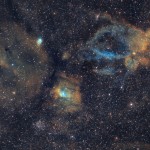 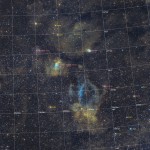 
This area is rich in diversity offering the Open Cluster M52, Emission Nebula SH2-157 aka The Lobster Claw Nebula as well as SH2-161.  Also included is the more famous Bubble Nebula NGC 7635.

Imaged from my backyard outside Pittsburgh, PA. 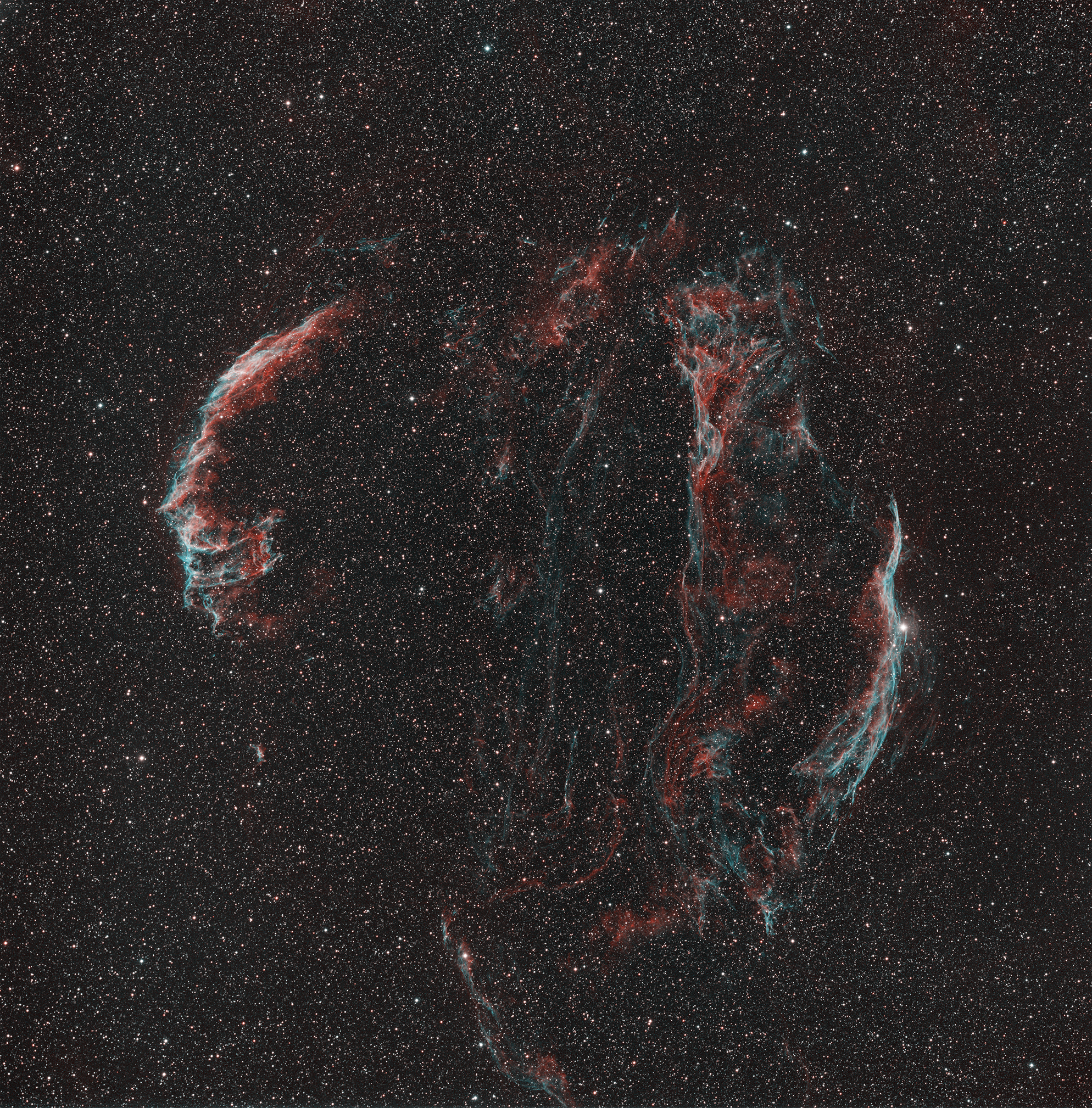